*Barium Live is now known as Process Automation and the BPMN Modeler 2.0 is now called Process Studio.
We are in the process of updating the Help Center, some articles will reflect the new name and some will retain the old while we update them.
Home Configure process applications Variables

When to use variables

Variables are used when you need to share information between generated data from the session, data specified in form fields, and data presented in customized message dialogs.

How to use variables

All variables can be referenced in forms and in customized message dialogs like external start confirmation message.

When you want to refer to a variable, use $-sign before and after the variable.

To refer to a form field with a variable you just type $dataID.formfield$.

Example: You can set a value from a formfield in another formfield by using the attribute "value" in the field you want to populate.

Task variables are mainly used on tasks, for example when you send a notification mail.

Global variables works a bit differently from the rest of the variables.  They are used to post information about the logged-in user in forms, when the form is created.

The global variable collects information from a user who is logged in, opens the form for the first time, and posts that information in the form.

How to set up Global variables

To use a global variable, you need to have form field with a default value were you enter the variable. 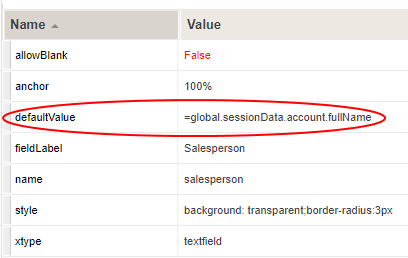 Claims variables can only be used if a contract is using SAML.

When a user logs on to Process Automation the IdP (Identity Provider) can also send specific data about the user that can be populated by variables.

The values in claims are customer-specific and can vary depending on what the IdP sends to Process Automation.