*Barium Live is now known as Process Automation and the BPMN Modeler 2.0 is now called Process Studio.
We are in the process of updating the Help Center, some articles will reflect the new name and some will retain the old while we update them.
Home Script Components Script Component - Clear Field Value

Clear Field Value is a Script Component that automatically clears a Data Object form field in your process model.

This is useful for example if a field value (such as a cost suggestion) has been filled in and later rejected and the data object has been sent back in a loop in order to receive a completely new value for that form field. It might then be preferable if the old rejected form field value was cleared allowing for fresh new input. 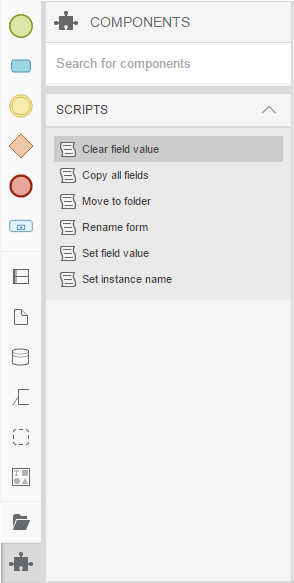 Add the Clear Field Value component to a process

How to clear multiple fields in the same Script Task

If you want to clear more than one field in that specific form, simply drag and drop one or more additional Script Component from the Component section in the Asset Browser onto your existing Script Task and configure your second script component. All added components will be accessible from the left side menu in the Configure Script setting. Note that a script component can only ever have one output data object connected to it which means that if you'd like to clear fields in several different forms, a new script task is required for each new form.