*Barium Live is now known as Process Automation and the BPMN Modeler 2.0 is now called Process Studio.
We are in the process of updating the Help Center, some articles will reflect the new name and some will retain the old while we update them.
Home Modeling elements Add forms to your process

Add forms to your process

Forms are the information carrier of the process and almost every process is in the need of transporting and gathering information between the users, the performers and the systems.

To add forms to your process you will need one or more form templates and maybe one or more data objects, the difference of these objects are:

Add forms to a process

You can set whether a form should be editable or just read-only in a Task by configuring the direction of the arrow between the data object and the task. Default the data objects are editable, data output.

Change the setting by double click on the arrow connecting the task and the data object and select Change direction.

NOTE: You can create dynamic forms that have different visible and editable areas in different tasks of the process, learn more about this in the article View modes.

This is useful for when you want the user to decide if the form needs to be created and filled out or not, maybe you have multiple forms connected to the task for different usage depending on the instance type.

NOTE: All forms have support for View Modes. Combine features like optional forms, optional, hidden or disabled fields to create dynamic forms customized to the users and performers. Read more about view modes in the article View Modes.

Add labels to associations between data objects and flow objects to additionally describe the process and the information relationship. The text you write on an association will also replace the text Create or Edit which is written before forms in the Task View. 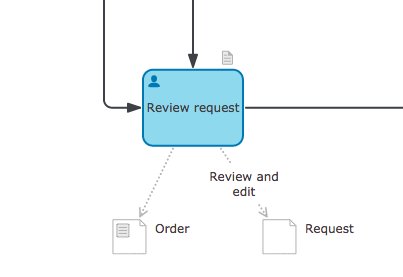 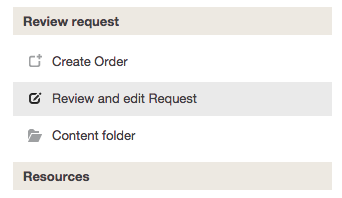 When performing a task all forms connected can be viewed in the Content Folder, organised directly in the root or in sub folders depending on Sub Processes. Sometimes it can be helpful to rearrange the forms and to organize them in new structures. In the modeler, for all Form Templates and Data Objects, there is a setting called Move Data Object, this allows you to configure how the Data Object should be structured after a specific task has been performed.

How to move data objects in the Content Folder

Create a new folder for the form template/data object

Write a folder name in the input area. This can be done for a newly created form template in order to designate a specific folder for the form to be created in.

Write "../" in the input area and the form template/data object will be shown one step up in the hierarchy of processes.

If you are creating settings for a nested sub process, i.e. you have two sub processes, you can write "../../" to move the template/object two steps up.

Use both "../" and a new folder name and the template/object will be presented one step up to the sub process master process and in the folder with the name you set.